”While a small percentage of native-born Americans may be harmed by immigration, vastly more Americans benefit from the contributions that immigrants make to our economy, including lower consumer prices. As with trade in goods and services, the gains from immigration outweigh the losses.”

”While economists agree that immigration produces net benefits the economy, they debate how to measure these effects.”

“Among economists, there is a general consensus that in broad terms the economic impact of immigrants on a host society is positive.”

”Virtually all economists agree that immigration increases the wealth of the United States. For example a group of economists all of whom had been either president of the American Economic Association or a member of the President’s Council of Economic Advisors, were asked ‘On balance, what effect has twentieth century immigration had on the nation’s economic growth.’ 81% of these prominent economists answered ‘very favorable’, 19% said slightly favorable, not a single one said slightly or very unfavorable”

”[M]ost economists believe that immigration has had a significant and positive effect on American economic growth in the twentieth century.”

”[E]conomists, as a group, tend to be pro-immigration.”

”Contributions of immigrants to economic growth are enormous”

”The most recent academic research suggests that, on average, immigrants raise the overall standard of living of American workers by boosting wages and lowering prices.”

“Our review of economic research finds immigrants not only help fuel the nation’s economic growth, but also have an overall positive effect on the income of native-born workers.”

Edward Lazear, Chairman of the Council of Economic Advisers (2007)

”The theoretical and most of the empirical work done by economists on immigration and economic growth largely reflects the view that immigration has positive growth implications.”

”…we should be looking to immigration as a creative force in our economic favor. Allowing in more immigrants, skilled and unskilled, wouldn’t just create jobs. It could increase tax revenue, help finance Social Security, bring new home buyers and improve the business environment. ”

”In the ongoing debate on immigration, there is broad agreement among academic economists that it has a small but positive impact on the wages of native-born workers overall:”

”Relaxing immigration laws is the most pro-growth measure the rich countries’ governments could take.”

”[V]irtually all economists agree that immigration makes us richer, not poorer.”

“I think all economists believe from evidence that immigration raises not only the GDP of the United States because we have more people now do useful activities, but it also raises the part of the GDP that goes to current residents in our country.”

”Borjas has been making this case … for more than a decade. But the more elegantly he has made it, it seems, the less his colleagues concur. ’I think I have proved it,’ he eventually told me, admitting his frustration. ’What I don’t understand is why people don’t agree with me.’”

”Immigration is, on the whole, good for economies; and right now, rich countries can do with all the economic help they can get.”

”The emerging consensus among economists is that immigration provides a net benefit. It increases demand and productivity, helps drive innovation and lowers prices, although there is little agreement on the size of the impact on economic growth.”

”Economists, as a rule, like to look at the big picture. And the vast majority of the economic literature argues that a more liberal immigration policy would be good for the U.S. economy as a whole. … as these debates continue, it’s worth noting that mainstream economists mostly agree that more immigration is, on balance, good for the economy.”

”On balance, nearly all of the economists – 44 of the 46 who answered the question – believe that illegal immigration has been beneficial to the economy. Most believe the benefits to business of being able to fill jobs at wages many American workers won’t accept outweigh the costs.”

”Few areas of economics have provoked as much fruitful research as immigration, and while disagreements remain, there are at least a few things we can glean from that literature: 1) It’s really good for immigrants, 2) It’s very good for the economy as a whole, 3) It increases innovation, 4) The typical native-born probably benefit, 5) Low-skilled immigrants probably don’t see any effect.”

”[T]he consensus among most economists is that immigration, both legal and illegal, provides a small net boost to the economy.”

”[R]esearch has found that immigrants – including the poor, uneducated ones coming from south of the border — have a big positive impact on the economy over the long run”

”Most economists agree that a mass legalization program would have a net positive long-term effect on the economy, and that agreement includes even Harvard’s George J. Borjas, whose studies of immigration and falling wages have long been cited by those who oppose more liberal immigration policies.” 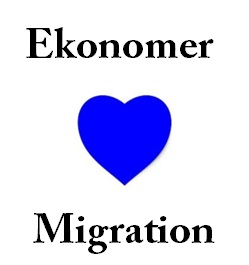 This entry was posted in Migration. Bookmark the permalink.